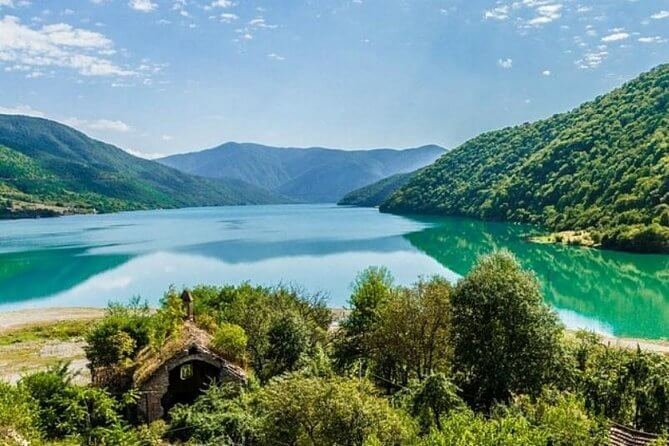 It is a sovereign country in the South Caucasus region.  In western Asia, [14] it is bordered on the west by the Black Sea, on the north by Russia, on the south by Turkey and Armenia, and by Azerbaijan on the east.

GDP, according to the estimate for the year 2010

The Georgians call themselves Kartvelippi (ქართველები), their land is Sakartvelo (საქართველო) which means Kartvelian land, and their language is Kartulli (ქართული).  According to Georgian accounts, the Kartvelian people are originally from Cartelus (grandson of Japheth bin Noah).  The name Sakartvelo consists of two parts.  Its root is known as Kartville-((ქართველ-ი) inhabiting the heart of the eastern central region of Georgia's Kartli-Iberia which belongs to classic and Byzantine sources.

The ancient Greeks (Strabon, Herodotus, Plutarch, Homer, etc.) and the Romans (Titus Levius, Cornelius Tacitus, etc.) called the first East Georgians the name of the Iberians and the inhabitants of the first western section of the Kolkhites. [22]

Georgians, like the rest of the Caucasus, do not belong to any of the ethnic groups in Europe and Asia.  The Georgian language, which is the most widely used South Caucasian language, is not classified as Indo-European, Turkish or Semitic.  Currently, without a doubt, the Georgian or Kartvelian people result from the integration of the indigenous population with immigrants to the Caucasus from the remote Anatolian side in ancient times.  Josephus mentions in the ancient Jewish novel the Georgians as Iberians and they were also called Tobel Tobal.

The name Georgia and Georgians appeared in western Europe in many yearbooks at the beginning of the Middle Ages.  Both French historian Jacques de Vitry and the English traveler Sir John Mandeville stated that the reason for the nomination of the Georgians was in relation to St. George. [24]  In the first month of 2004, Georgia adopted the five-pointed flag, which is the flag of Saint George.  There are those who argue that the flag was used in medieval Georgia beginning in the fifth century A.D. [25] [26]